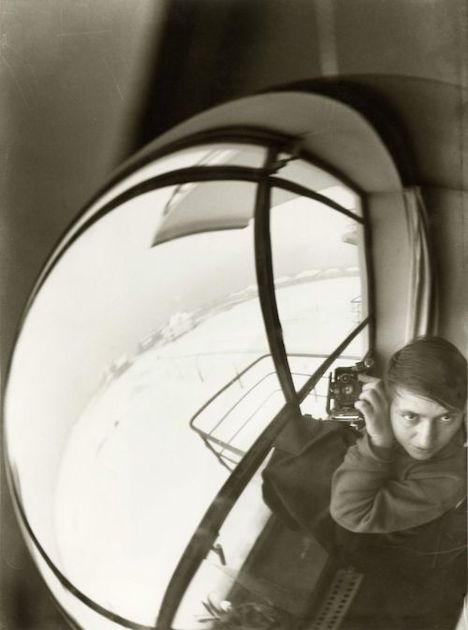 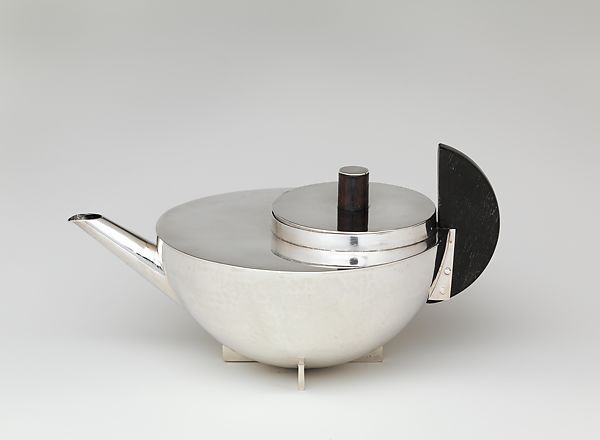 Walter Gropius, founder and director of the Bauhaus between 1919-1928, instituted stratagems to make the school’s products appear seamless as if machine made, though they were in fact made by hand. Particularly in the 1923-24 period, great effort was put into minimizing any imprint of the craftsperson’s hand (such as tool marks and irregular forms), instead favoring a factory aesthetic with a mirror-smooth finish. Brandt later recalled that the process of hammering to achieve such an effect was laborious as well as tedious. Art historian George H. Marcus further observes that when placing a series of Brandt’s tea infusers side by side, though they are essentially the same machine-quality object, they each have their own individuality.

The reflective surface (probably a lamp?) featured in this photograph does not betray its process. Rather, the focus is placed on Brandt and her studio environment. Her reflection follows the curvatures of the globular lamp, granting the surface of the object a seemingly limitless depth.

When Will My Reflection Show?

Brandt’s metal work objects made the perfect canvas for her photographs allowing her to experiment with the reflective surface of an object that she likely made herself. In this way, we may understand this photograph to be a double self-portrait. It serves not only as demonstration of her craftsmanship in creating a perfect surface, but also quite literally bearing her hand, the hand that made the lamp and the photograph. There is also a sense of irony that she shows the hand that was intended to be invisible in her metalworking process.

“At first, I was not accepted with pleasure—there was no place for a woman in a metal workshop, they felt. They admitted this to me later on and meanwhile expressed their displeasure by giving me all sorts of dull, dreary work. How many little hemispheres did I most patiently hammer out of brittle new silver, thinking that was the way it had to be and all beginnings are hard. Later things settled down, and we got along well together.”

Though at this point “Who’s looking?” is a standard question, it may not be relevant in this instance. Rather, Brandt uses the medium of photography to reflect upon herself and to document her experiences in the Bauhaus. She does not look directly look out at the viewer, but instead diverts her gaze up and over us. She appears more fixated on capturing her own reflection than making a connection with a presumed viewer.

Brandt’s interest in photography began in 1923 with a self-portrait, Selbstportät mit Lilien (Self-Portrait with Lilies). 1929 was a particularly productive year for her photography and she became active with the Bauhaus magazine.2

Brandt was not the only Bauhaus woman to experiment with the medium of photography. The historian Ulrike Müller notes that Lucia Moholy and Lászlo Moholy-Nagy in particular embodied two strains of photographic approaches at the time. Where Moholy-Nagy was more inclined toward the productive art photo, Moholy committed to the reproductive or documentarian photograph.3 Brandt seems to walk the line between these supposedly discrete categories in that she both documents her environment—the window, the balcony—as well as experiments with form and perspective.

Photography as Medium for Self-Reflection

Brandt refuses the trope of picturing the female body in a state of dressing or undressing. Nor does she express an intention to contemplate the ideal feminine form. Participating in such compositional choices likely would have detracted from her body as a productive force of material objects, including the photograph itself. By the 20th century there was precedence of images of working women situated in industrial environments, but Brandt opts to capture her craft in the metal that provides her reflection. To this end, the metallic surface that reflects Brandt’s portrait resists a “soft” or “sentimental” effect, instead emanating a quiet coolness. As highlighted by my annotations to the image above, the doubled self-portrait and the emphasis on her individuality speaks to an approach coded as both artistic and masculine. Given her presence in the male-dominated metal workshop, I venture reading this photograph as Brandt asserting the equality of her body, to and for herself.

In addition to her experimental photography, Brandt created assemblages of photographs that she later identified as photomontages. Our twenty-first century eyes are quick to categorize such works as a practice emblematic of the 20thcentury, used to process the speed and fragmentation felt in modern life.

Born in Chemnitz, Saxony, Marianne Brandt began studying fine art at a young age, eventually arriving at an expressionistic painting style. In the summer of 1923, she saw the Bauhaus exhibition in Weimar and immediately knew that she wanted to turn to the applied arts. Within the year, she moved to the State Bauhaus and in January 1924 began a preliminary course at the Weimar Bauhaus. She was reluctant to join the Bauhaus weaving workshop, which was largely dominated by women, and was instead encouraged by Moholy-Nagy to join the metal workshop. Brandt and her fellow metalsmith Wilhelm Wagenfeld quickly took on dominant roles. Over 50% of the models and designs from the metal workshop have been attributed to them.4 One of Brandt’s most famous creations was a silver and ebony tea infuser, an object that clearly expresses the Bauhaus visual language in its geometric construction and attentiveness to functionality. Brandt officially became an “employee” of the metal workshop after the Bauhaus moved from Weimar to Dessau in 1927 and where she remained until 1929.5 She went into hiding between 1933-1945, before reemerging in the post-war period to teach fine and applied arts as well as produce metalwork designs for social industrial corporations.