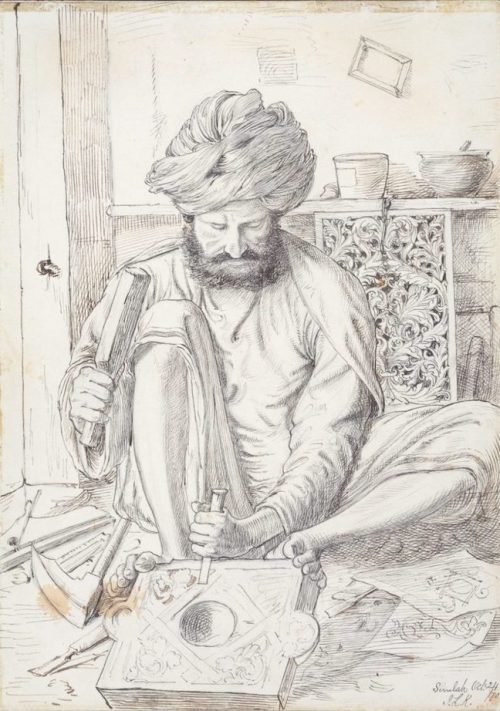 The British understood existing “authentic” knowledge systems for the craftspeople of India as being passed between the bodies of makers. Gripping the working object with one’s feet, is here interpreted by Kipling’s illustration to be an inherited practice. The total body concentration of the craftsperson, combined with his hereditary knowledge, completes a depiction of the elusive transfer of bodily knowledge to material object.

The British consumers loved Indian manufactured objects. However, they saw the integration of industrial technology, or really any kind of mechanized process, as systems that degraded Indian craft. The scholar and curator Deepali Dewan notes that art schools and education systems were instituted to prevent a further (perceived) decline, but were also a means of controlling the craftsperson’s body. Tools such as the drawings scattered around the craftsperson indicate the presence of such educational systems.

Pictured here is an “authentic” moment of production in which the embodied knowledge of the craftsman is in the process of being transferred into the ornamented object by a process involving total body concentration. The downcast eyes of this individual also casts the viewer's gaze down to his task. It also further diverts the specifics of his identity; the individual conveyed by this image is “universal.” The individualism of the craftsperson does not seem to matter as much as the product that he is shown in the process of making.

The scholar and curator Deepali Dewan has observed that the British determined that Indian artists were unable to discern and reject “outside” influences on their craft. British-led teaching institutes were seen as a means to survey their progress in this area, as well as aid in the re-integration of traditional or “authentic” tools.

The most detectable eyes are those of the artist, John Lockwood Kipling. The question of “who’s looking” also implicates a question of audience. This image was circulated from the site it was produced, to being displayed in exhibitions in London, to reproductions in populations on the decorative arts of India. 1 In short, the viewership for this image was undoubtedly that of both an individual imperialist and an imperializing public, far from where the drawing was created.

Between 1870-1872, Lockwood Kipling was commissioned by the government to record the practices of Indian craftspeople in the North-West Provinces through a series of sketches. This drawing of a woodcarver in Simla is one of many that resulted from this tour and resides in the collection of the Victoria & Albert Museum. It is worth noting that this drawing is an effective representation of the elusive transfer of bodily knowledge to a tactile, handmade object. As this site explores through the images of Art Carpenter, Shoji Hamada, and Frida Kahlo, the visualization of such a transfer is not easy to articulate.

But make no mistake, the choice to depict the craftsperson’s body at work was not incidental. Rather, this image featured within a larger “civilizing mission,” a system that functioned with the thesis that Indian crafts were experiencing a decline due to the country’s influx of English goods.2 The “body at work” was thus symbolic of the colonial operation: for all the discussion surrounding the “authentic” art object, the focus was actually on disciplining and controlling the laboring Indian body.3

The terms “native” and “authentic” are powerful; their application speaks of existing systems of power and dominance as well as necessitates the question of who controls the narrative and the gaze. To this end, the scholar and curator Deepali Dewan significantly argues that “The subject position described by the term ‘native craftsman’ did not and does not exist outside of the colonial knowledge that produced it.”4 Dewan’s claim that the idea of “native” is a construct built by colonialism is echoed by Edward Said who asserts that the “relationship between Occident and Orient is a relationship of power, of domination, of varying degrees of a complex hegemony.”5 And further, that “The Orient was Orientalized not only because it was discovered to be ‘Oriental’ in all those ways considered commonplace by an average nineteenth-century European, but also because it could be—that is, submitted to being—made Oriental”6 The stickiness of “native” and “authentic” resides in the fact that these terms are themselves anything but what they mean. The application of “native” and “authentic” to craft objects problematically, but productively, extends to the artisans who made the objects. In essence, it turns the craftsperson’s body into a universalized monolith, as exemplified by Lockwood Kipling’s drawing in which the individual does not even meet the eyes of the viewer.

Lockwood Kipling was undeniably an imperializing force in India. Born in Pickering, North Yorkshire, John Lockwood Kipling’s interest in art and design was sparked by a visit to the Great Exhibition of the Industry of All Nations held in London in 1851. This experience proved to be a formative one when he became involved in the decoration of the South Kensington Museum. In 1865, he and his wife Alice MacDonald moved to India where Lockwood Kipling had been appointed a professor of Architectural Sculpture in the Sir Jamsetjee Jeejeebhoy School of Art and Industry in Bombay (now Mumbai), eventually becoming the school’s principal. By 1875, Lockwood Kipling was appointed the head of the Mayo College in Lahore, a position from which he advocated for “traditional” Indian crafts. Lockwood Kipling’s legacy was sprawling; in addition to teaching, he designed decorative elements for buildings in Bombay, as well as designed the uniforms for the Lord Lytton’s Imperial Assemblage of 1877.